Weymouth Events Cancelled and Postponed Due To COVID-19

Weymouth Events Cancelled and Postponed Due To COVID-19 Find …

You are here: Home » Things to Do » Sandsfoot Castle

History of Sandsfoot or Weymouth Castle

Sandsfoot Castle was completed in about 1539, on the order of King Henry VIII, to provide in conjunction with Portland Castle a defence for shipping in the safe anchorage of ‘Portland Roads’ (Portland Harbour).

It had two storeys and a basement, providing an emplacement for heavy cannon, powder magazines and quarters for about fifty men.  It was protected by a ditch and earth rampart, remains of which account for some landscape features of these gardens.  Evidence suggests that some of the building stone came from earlier local ecclesiastical buildings destroyed after the Dissolution of the Monasteries.

The castle was in bad repair by 1584 due to undermining by the sea.  Remedial works were undertaken in 1610/1611 and again in 1623.  It was held for the King during the Civil War until 1644/1645 when the Royalists withdrew considering it of no further use to them.  For some of this period it was probably used as a mint for striking coinage.  Sandsfoot was dropped from the Military Register in 1665 but remained as a storehouse until 1691.  It never saw serious military action. 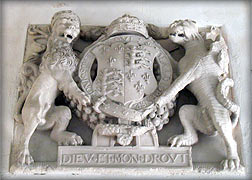 The Royal Coat of Arms carved in stone was removed from the castle and is now over the south door of All Saints’ Church, Wyke Regis.

Weymouth Corporation purchased the ruined castle in 1902 from the Department of Woods and Forests for £150. Tudor style gardens were laid out in front of the castle in 1931 and have always been popular with local people. A café and toilet was re-established in 2006.

Today the castle looks little different from 18th century images.  Over the years it has been robbed of much of its stone facing, especially from the easily reached lower levels. Some of which, it is said, was used in the 19th century for the first stone bridge between Weymouth and Melcombe Regis.

Since the enclosure of Portland Harbour was completed in the late 19th century the threat is less from the sea and more from land instability which has led to some erosion of the structure in recent years.

A short novel by Joseph Drew set in the reign of Elizabeth I has Sandsfoot Castle as its backdrop.

In 2009 and 2010 the ‘Friends of Rodwell Trail and Sandsfoot Castle’ in partnership with Weymouth and Portland Borough Council received a grants from the Heritage Lottery Fund to renovate the castle and add an internal walkway with floodlighting in order to give free public access and conserve the castle for future generations.

Sandsfoot Castle has been listed by English Heritage and is Weymouth’s only Scheduled Monument. Be Styled Like a Princess This Christmas at The Hair Station

Buy One Get One Free Hot Chocolates at The Black Dog

STAY UP
TO DATE

Sign up to our free newsletter to receive exciting news and offers sent straight to your inbox.